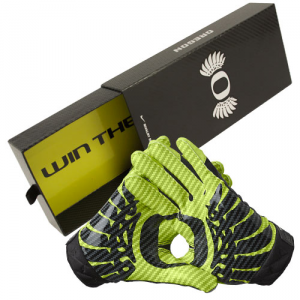 Taking control of one’s destiny is a thought many aspire to, but only the best obtain. It’s at the very core of the Oregon Ducks to rise up and leave fate in the hands of no one else, so be there to help your Ducks take victory and “Win the Day” in these 2011 Pro Combat Rivalry Vapor Carbon gloves from Nike. The Pro Combat Rivalry collection is a limited, one-game-only series made just for your Ducks’ September 3, 2011 installment of their Cowboys Classic matchup against the LSU Tigers. These on-field gloves contain an array of features including Supergrip on the palms to deliver a high degree of friction upon contact with the ball, a tear-resistant gusset system that improves range of motion in the fingers, and a full team logo, which forms when the palms are placed together, for a one-of-a-kind, lasting display of indomitable Oregon pride!