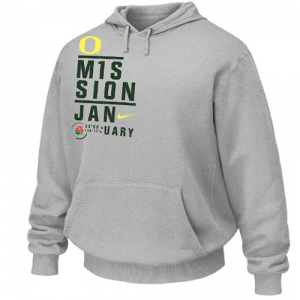 On January 2, 2012, your Oregon Ducks’ mission is to defeat the Wisconsin Badgers during the 2012 Rose Bowl in Pasadena. Represent your bad-ass team in this Mission January hoodie from Nike featuring the Ducks’ team logo, “Mission January” lettering, the exact coordinates of the Rose Bowl and the 2012 Bowl logo printed on the front! GO DUCKS!