A video showing Cliff Harris’ traffic stop in June is creating some buzz.

It has been recently reported that Darron Thomas was a passenger in the vehicle driven by Cliff Harris who was pulled over for speeding 118 miles per hour on I-5 between Portland and Eugene, Oregon.

From the Bleacher Report:

Darron Thomas was a passenger in the car driven by Cliff Harris, which resulted in Harris’ eventual suspension. What makes this such a big story is that not only was Darron Thomas in the car, but officers reported marijuana was present. Whether or not Darron had been smoking himself is unknown. But this is not the first time Darron was in a car he probably should not have been in. 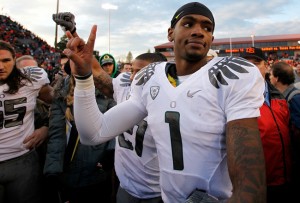 In 2008 Darron Thomas was involved in a car accident which resulted in several people being admitted to the hospital and in 2010, he was involved in another incident where marijuana was present.

These three issues bring up the question, should Darron Thomas be available for the opening game against LSU? I find it hard to believe that if the Ducks were playing New Mexico, that this would even be a question. So should Chip Kelly suspend Darron Thomas like Cliff Harris? Is three offenses too many to let slide? You tell me. Comment below if you think it’s time he be punished, or if you think Chip should let the star quarterback slide with another warning.

What do you think? Should Darron Thomas be suspended from the first game of the season against LSU?