During the 4th quarter of the Oregon vs. California game Thursday night, LaMichael James suffered what many thought to be a career-ending injury.  He was down on the field for what seemed like several minutes as the fans in Autzen stadium waited for any sign of life from James.  It was the first time that I’ve ever heard Autzen Stadium so quiet.

Turns out that LaMichael James didn’t suffer any broken bones; he dislocated his elbow. He’ll be back on the field shortly. Can’t keep a Fighting Duck down for long. 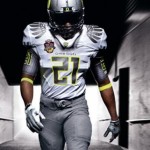 There is no one all-star player on the Oregon Ducks football team.  The guys all work hard and get time with the ball. Do you think the Ducks have what it takes to make it to the Championship game again this year? Here’s what Bleacher Report’s Alex Shoemaker has to say:

Coming in at No. 3 in ESPN’s early preseason top-25 poll, expectations for Oregon are higher than ever. However, the question on Duck Nation’s mind still remains: Does Oregon have what it takes to bounce back from a heartbreaking loss to Auburn and compete for the Pac-12 title?

Oregon will three-peat as champions of the conference because they posses all the necessary tools needed to defend their title.

On the defensive side of the ball, lockdown corners Cliff Harris and standout defensive end Terrell Turner are back and better than ever. Oregon also returns last season’s starting punter and kicker, as well as their returners. The Ducks have a lot of stars back from last year’s squad, one of the main reasons for the sky-high expectations.

It may not be offense that carries the team to the BCS Championship game this season.

What may carry the Ducks this upcoming season is their strength on defense. The defensive line was at one time seen as a weakness for the Ducks, but that has changed since the start of spring practices.

The emergence of standouts Ricky Heimuli, Dion Jordan, Wade Keliikipi and Taylor Hart has shown great potential for the Ducks while Terrell Turner has been out with a leg injury. And as was expected, the secondary will be the best unit for the Ducks in 2011. Young stars Troy Hill and Terrence Mitchell are proving themselves worthy of playing time, while Cliff Harris and John Boyett are All-Conference caliber players. Oregon has great depth across the board on defense.

We’ll keep our eye on the Ducks football team this season. Their first game is against LSU in September. Here’s to good football with a great ensemble team!