There’s guaranteed to be “fire and brimstone” in this battle of Pac-12 Elites.

October 15th is sure to be an important game day in college football. The Oregon Ducks go up against Arizona State at Autzen Stadium in Eugene, Oregon. This is an important rivalry where both teams are undefeated in conference play– Oregon is 2-0 and ASU 3-0.

ASU’s quarterback, Brock Osweiler, has a high quarterback rating of 147+ and his ratio of touchdowns to interceptions is better than average. Combine those stats with Oregon’s defensive back’s inability to consistently stop the deep pass, the Sun Devils have a good chance to put points up against the Ducks.

Number 9th ranked Oregon may have a fight on their hands in next week’s game against Arizona State Sun Devils.  How do you think Oregon should game-plan against ASU? 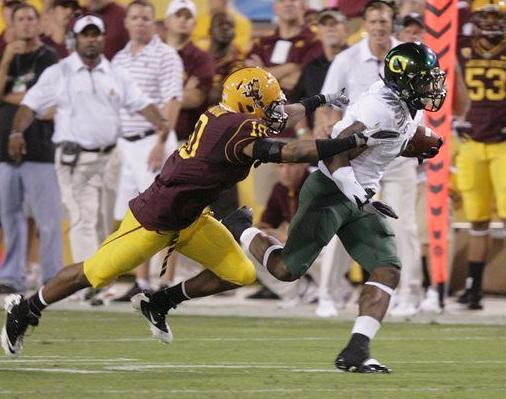